Getting your photo featured on the Flickr blog is exciting because your photo is, for a short while, exposed to thousands of people who would not have seen it otherwise. One of my photographs was recently featured on Flickr’s blog and suddenly I had over 10,000 views, hundreds of favorites, and many kind comments.

How I Got Featured on Flickr’s Blog

I was skimming Flickr’s welcome page when I noticed a short blurb under the blog section in the right column about submitting your best shot of 2010 to a group appropriately titled Your Best Shot 2010. Photos added to the group’s pool would be considered to appear on Flickr’s blog. I thought “why not” so I looked through the few photos I had uploaded to Flickr and submitted my favorite to the group’s pool, a photo of my new kitten lying in my lap, not expecting anything to come of it besides a few people seeing the thumbnail in the pool.

A couple weeks later, I noticed that I was getting an abnormally large amount of comments (like over five, haha) and then I finally noticed that my photo was on the welcome page of Flickr for all to see. I clicked through to the blog post and my photo was first in a group of adorable feline friends in a blog post titled Your Best Shot 2010: The Cats & the Kittens. 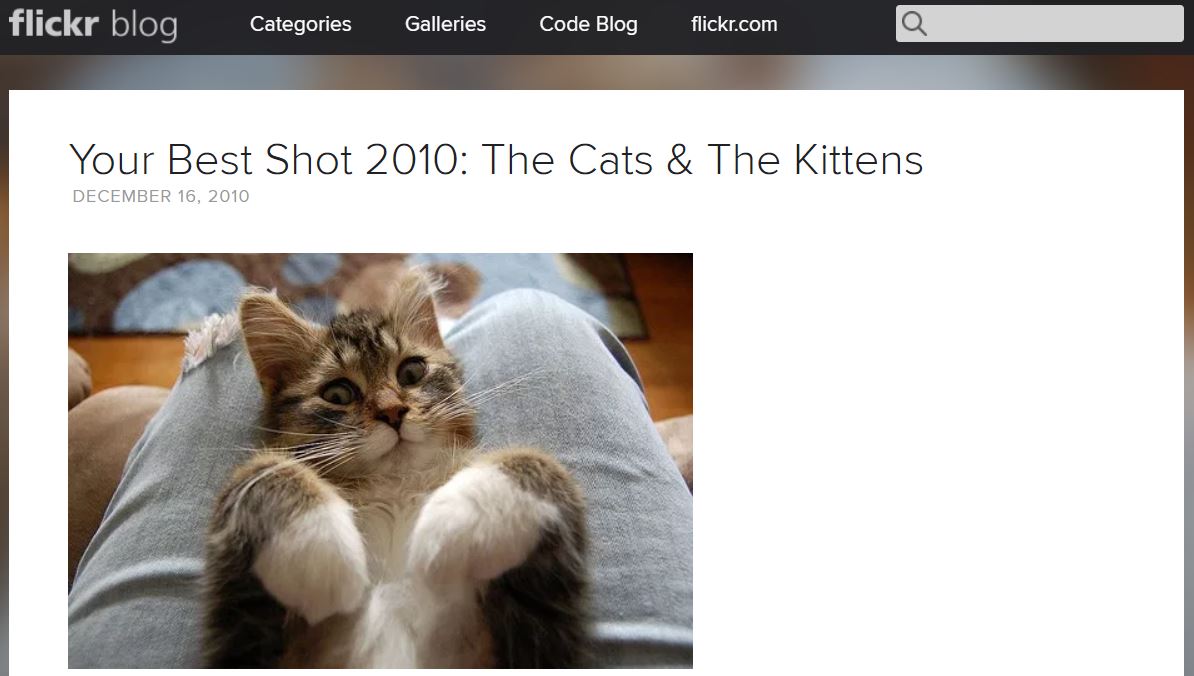 It was fun reading all the comments I was getting on that photo and others in my photostream. It was like the equivalent of going “viral” but on Flickr!

Being featured on Flickr’s blog is entirely different than being “Explored”. In some ways, it’s more difficult and in some ways, it’s easier. To appear on Explore, a mysterious set of conditions must be met. I am not quite sure how Explore works but that is basically how I’ve seen it described.

“Luck is what happens when preparation meets opportunity.” – Seneca

Being featured on Flickr’s blog is 80% luck and 20% preparation.

The 80% luck part is not something that you can control. The photos that are chosen to be featured on Flickr’s blog are entirely up to the people whose job it is to choose them. There are ways, however, to maximize your opportunity.

My photo wasn’t featured on Flickr’s blog just randomly. I did a few things that maximized the opportunity for it to do so.

Good luck and start preparing for an opportunity! 😉